Money laundering is the process by which large amounts of illegally obtained is given the appearance of having originated from a legitimate source. So basically, all the ways to convert the black money into white money are Money laundering. But in Money laundering, the black money must involve a predicate crime such as the violation of Indian Penal Code, IPC, Narcotics, Prevention of Corruption Act and Human Trafficking. This is because in India, stashing black money is simply a civil crime involving tax evasion, money laundering has criminal dimensions related to black money. That is why, we use the term Dirty Money in this context. 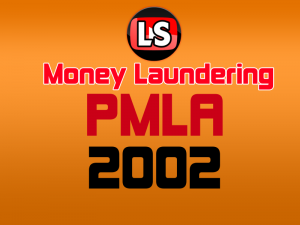 There are three different steps in money laundering described by three terms as follows:

Dirty Money, generally in the form of Cash is inserted into a legitimate financial institution.

Layering involves sending the money through various financial transactions to change its form and make it difficult to follow. Layering may consist of several bank-to-bank transfers, wire transfers between different accounts in different names in different countries, changing the money’s currency, and purchasing high-value items to change the form of the money.

At the integration stage, the money re-enters the mainstream economy in legitimate-looking form. This may involve a final bank transfer into the account of a local business in which the launderer is “investing” in exchange for a cut of the profits. At this point, the criminal can use the money without getting caught.

The first major initiative in prevention of money laundering was United Nations convention against illicit traffic in Narcotic Drugs and Psychotropic substances in 1988. But major change came with the introduction of Financial Action Task Force (FATF) in 1989. The Financial Action Task Force (FATF) is an inter-governmental body established in 1989 by G-7 Summit in Paris, initially to examine and develop measures to combat money laundering.

The Prevention of Money Laundering Act, 2002 (PMLA) forms the core of the legal framework put in place by India to combat money laundering. It came into force in 2005. PMLA defines money laundering offence and provides for the freezing, seizure and confiscation of the proceeds of crime. Salient Features of this act are as follows:

Furnish information of above transaction to director within the prescribed time.

Verify and maintain the records of identity of all clients in respect of such transactions to Director within the prescribed time.

The PMLA was enacted in 2002, but was amended thrice, first in 2005, then in 2009 and then 2012. The 2012 version of the amendment received president’s assent on January 3, 2013, and the law became operational from February 15, when the finance ministry notified it. PMLA (Amendment) Act, 2012 has enlarged the definition of money laundering by including activities such as concealment, acquisition, possession and use of proceeds of crime as criminal activities. Some other features are as follows:

Registration Dates for JAIIB MAY 2023 TO START SOON! In this article, we will talk about the upcoming Exam dates for the Junior Associate of...
01:03:30
Jaiib

JAIIB PPB Principles and Practices of Banking Short Notes Module-wise In this PPB short notes 2023, we are going to provide the important topics from...
EXAM 2023

JAIIB MAY EXAM DATE 2023 In this article, we will read the about the JAIIB exam 2023, the JAIIB may Exam dates, the JAIIB application...